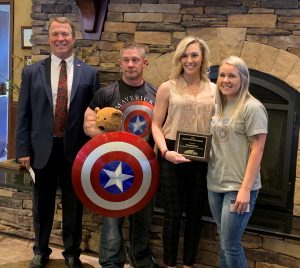 Don Bennett with Logan and Colleen Bench and the nominator, Megan Luce

We are honored to announce Maverick Bench as our second Hometown Hero. “He brought our community together during his battle of aplastic anemia. He had such a big soul and big heart for those around him. He is the perfect person to be honored as our hometown hero.”  Megan Luce wrote in her early March nomination of Maverick. The astronomical number of votes for Maverick support that statement.

What started as posts on Logan Bench’s personal Facebook page to keep his family informed regarding Maverick’s condition turned into a way to bring the Valley together during a time when everyone was facing a confusing year. “He was a light during COVID and a message to keep fighting,” said Megan. Megan spoke of the togetherness and love that everyone shared supporting Maverick during his fight. “I would read the blogs every morning, share them with my kids and send them to my relatives in Washington, Arkansas, and Louisiana. God has big plans for him.” She expressed the positive influence Maverick has had on her two young children, Devin and Charlie. They still remember where they were standing on the corner of Rose Crossing and LaSalle during the huge parade when they brought Maverick home.

The lasting impression Maverick has had on all of us is a testament of the beauty in the Flathead Valley. It takes just one person to bring out the greater goodness and in Maverick’s case, he truly reached almost everyone in the Valley, and beyond. Maverick’s parents, Logan and Colleen, were very grateful to accept the Hometown Hero Award on Maverick’s behalf, and wanted to thank everyone for their love and support. They especially wanted to recognize Angel Flight West with their free, non-emergency air travel for children and adults with serious medical conditions, The Jadyn Fred Foundation out of Missoula, and the Doug Betters For The Children Inc.

Logan and Colleen are trying to maintain a sense of normalcy with their other children and keeping busy with wrestling seems to help. If you follow them on Facebook, they have a dedicated a page for Maverick called Maverick’s Army. They are exploring the idea of creating a foundation called Maverick’s Army. But in the meantime, they have purchased a wrestling mat that has been traveling Montana appearing at wrestling tournaments in Maverick’s memory. “We even had a request to bring it to Oklahoma.” Logan mentioned they are looking into a trailer to carry the wrestling mat. “That way if anyone wanted to use it they could just hook up to the trailer.” Logan and Colleen have chosen the Doug Betters For The Children Inc. as the nonprofit to receive the $500 award. You can read more about Maverick and his beautiful family in an upcoming issue of The Daily Interlake.

The Hometown Hero award will continue running through January 2022. If you know of someone that is going out of their way, above and beyond expectations, cultivating our community and making a positive impact, please nominate them for the Hometown Hero Award. Each nomination is a true testament of the beauty in our community and demonstrates the impact individuals have on our families, friends, and neighborhoods. If the individual you nominated did not win this month, we encourage you to nominate them again!